Now, using RME's advanced MADI interface technology for film/audio editing, recording/overdubbing, audio sweetening, Foley sound, and tracking orchestral arrangements for film soundtracks, the redundant Fireface UFX+ interface and ARC USB remote control setup has helped optimize TNT's workflow both in the studio and in the field by eliminating the need for unnecessary equipment and streamlining TNT's operations into the future of film production.

Founded by Tony Spataro, who has made a name for himself in the film industry as both a director and editor, TNT Film Productions studio technician Dan Dukes said the Fireface UFX+ interfaces have allowed TNT to maintain the character and quality of their work without negatively affecting the techniques of their craft, which they developed using analog equipment.

"We are old school in that we enjoy traditional methods of recording film and audio," Dukes said. "But we chose RME because we were convinced of its true delivery on performance, which drove us to replace the old ways and achieve the high-end results we expect."

Redundant Recording In-Studio & Beyond
TNT Film Productions' new studio setup includes one RME Fireface UFX+ and ARC USB remote-control unit per studio, connected via 160 feet of Alva MADI fiber optic cable, allowing TNT to link the units for an extra level of redundancy during recording in either studio, along with providing traditional multiple tie lines between the studios, all kept in a digital domain.

“Having two RME Fireface UFX+ units allows us to work between studio rooms through MADI connectivity,” Spataro said. “And using the ARC to control whatever we assign makes it possible to perform instantaneous actions — with no delay and no latency — triggering whatever actions you need with the touch of one button. And, by placing control right in front of you, the ARC USB remote control saves you from having to lean over to try to find the function knob you need on a console, or in a DAW, no matter how high-end the console or DAW may be.”

When it comes to recording in the field, Spataro will remove a UFX+ unit and an Alva MADI cable from one of TNT's studios and bring it on their production truck with a one-patch setup. Noting the simplicity of a MADI cable hooked up into the workflow process, Spataro said, “We can work at a serious distance between the film truck/mobile studio and the stage/film set.”

“It’s a great field unit,” Dukes added. “With the DURec [Direct to USB Recorder], we can just bring a thumb drive back to one of the studios after recording and start editing the playback right away. It saves us a lot of time and legwork. We start working immediately, and in addition, we have a backup. So, in case one unit goes down, we can just patch it in. Not to mention that the thumb drive serves as the backup to the project. How cool!”

Streamlined Mixing Workflow
While TNT Film Productions previously used an external mixer, the high quality of the preamps in the RME Fireface UFX+, combined with the ease of using RME’s TotalMix FX software, have eliminated the necessity for TNT's additional external hardware, like a mixer, while, at the same time, the MADI fiber optic cable has replaced the need for patch bays.

Spataro commented, “Feedback comes with the turf in the audio business. We all know that, and traditional methods of recording and mixing has its share of accidental feedback,” he continues. “We have been impressed by how tremendously the UFX+ minimizes feedback with its intelligent routing system.”

“The UFX+ combines complex matrix mixing with a creative kind of linear, in-series mixing,” Dukes said, “so it’s having the best of both worlds, because you can utilize matrix (parallel) mixing, but then if you desire to insert linear circuitry into your signal flow, you can do that very easily."

Using RME's TotalMix FX, Spataro said, "Recalling mix setups is a breeze — and super convenient. We do this all the time."

“Since we do TV and film, it’s nice to have different mixes,” Dukes added. “So we’ll have one mix for mastering, one for TV, one for film and one for instrumental soundtracks. With TotalMix FX, the mixes take place simultaneously. So if we want to hear the different mixes by toggling between them, we can, without affecting or interrupting the true audio signal flows associated with those individual mixes. They continue flowing to and from their destinations, in the background, while we toggle listening to them. It’s pretty incredible.”

Dukes continued that they don’t use a mixer now, just RME’s TotalMix FX which comes with all RME interfaces.

“And we’re not even going back to the DAW to mix down,” he explained. “We’ll just take the outputs directly from the UFX+ and master onto whatever format the client wants, and this is because of RME’s high-end output and amazing dynamics.

“I have to also mention that when we output to the different studio monitors, RME allows us to EQ those separate outputs on the UFX+ units, resulting in us not having to insert a separate graphic, or parametric equalizer just before the amps/speakers. RME provides this for us on all outputs. We love and take advantage of this option, especially since we can tweak the all the settings right from TotalMix FX, among all the various effects TotalMix FX provides.” 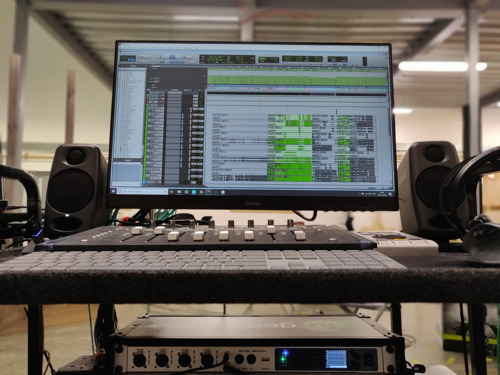 Paired with RME’s TotalMix FX software, the Fireface UFX+ allows for complex monitoring and routing while eliminating the need for larger consoles